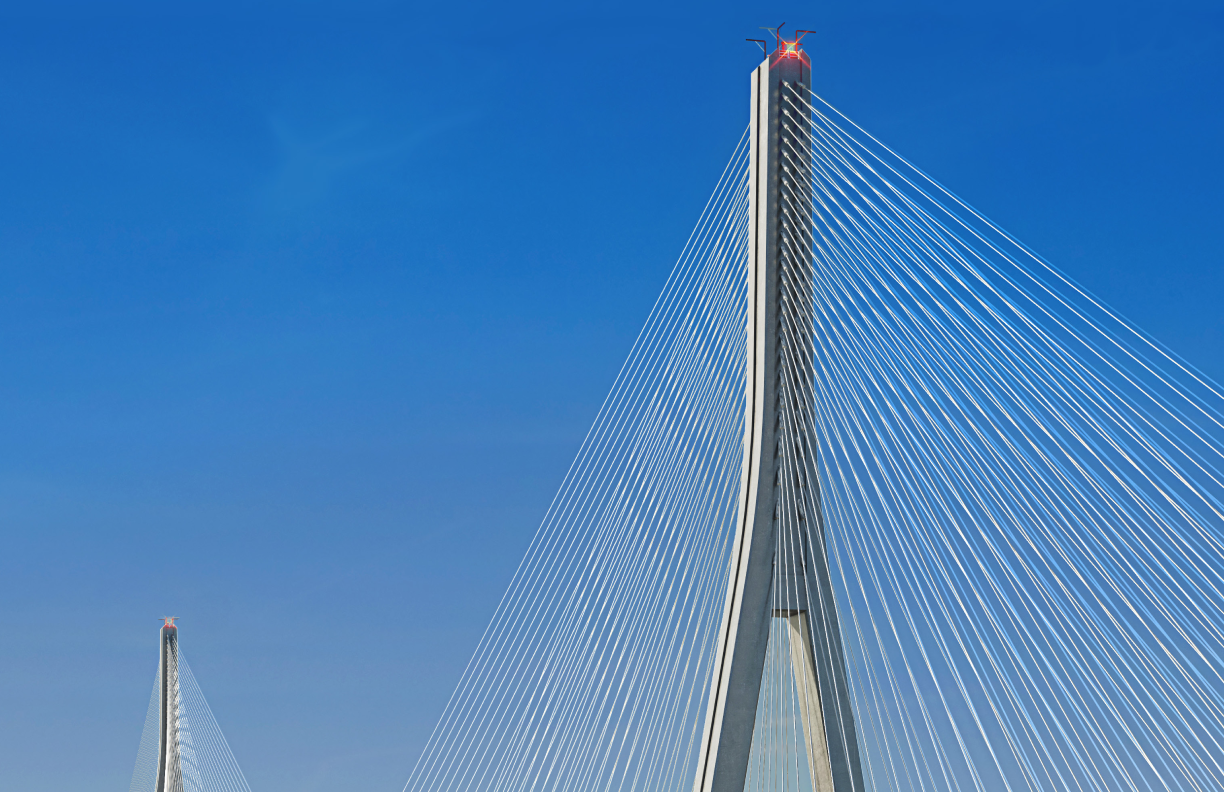 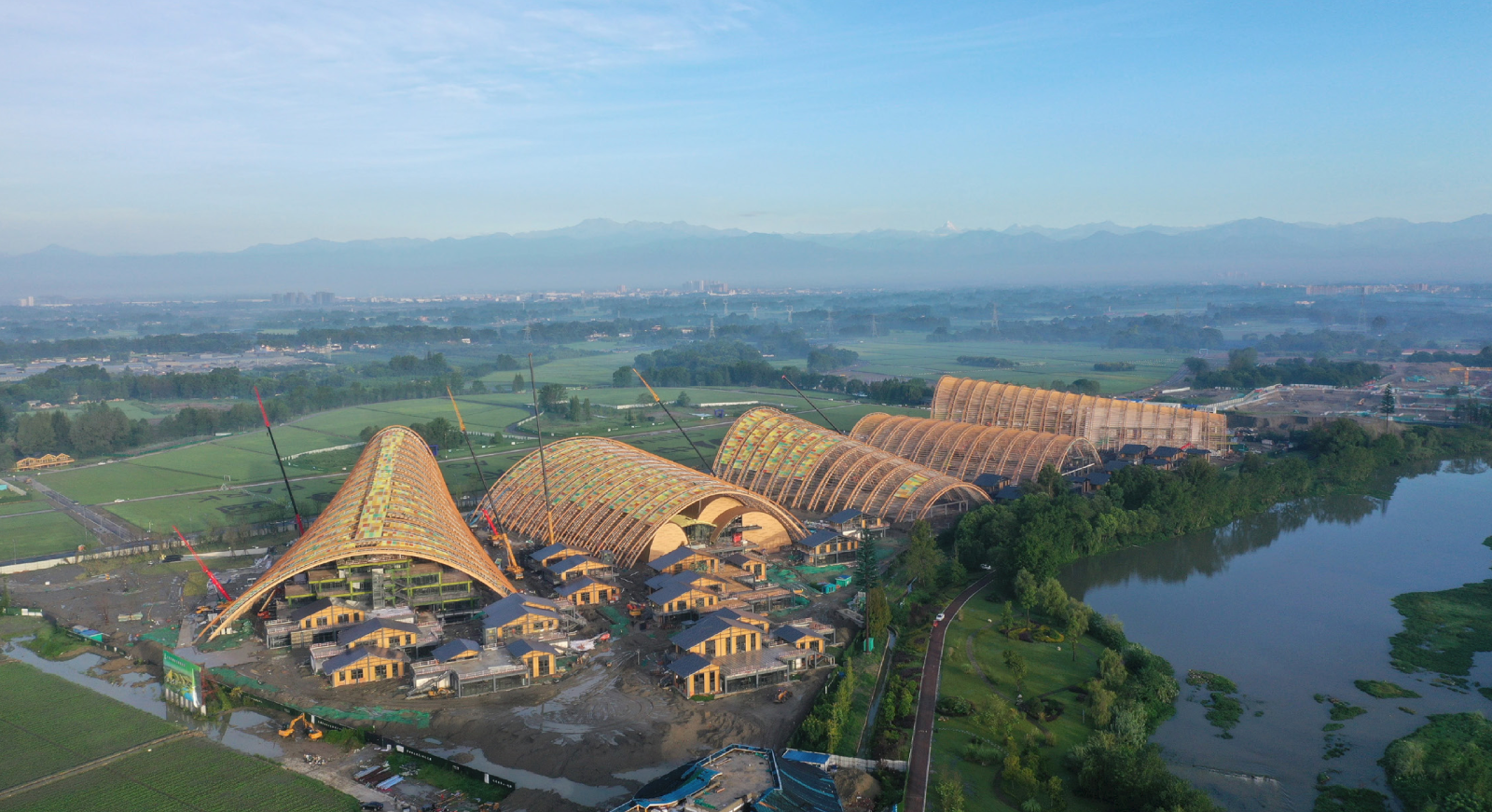 Acknowledgements. We thank the following companies for their part in the creation of these structures:
Cui Kai
CADG,
SKF Builders
Hasslacher Norica Timber
Mule Studio

The Tianfu Agricultural Expo Park is part of a major development program in the greater metropolitan area of Chengdu, which aspires to compete with other major economic hubs in China. Chengdu seeks to showcase the importance of rural areas while transitioning from a traditional farm-based state into the agricultural and technological powerhouse of southwest China. The five main buildings, with a total footprint of over 75,000m2, create space for a variety of different venues for the Agricultural Expo. Each of the five vaults is semi-enclosed with a light, cable-supported LED screen at front and a full opening at the back. Some of the structures are filled with inner buildings to support the agricultural expo, including a museum and convention centre, and some are open to house flexible spaces and temporary structures.

Cui Kai’s bold vision of the undulating buildings translates into 3500 unique curved timber members and a total Glulam volume of 6000m3. Creating an integrated design workflow based on parametric geometry definition, as well as automated generation of fabrication drawings and CNC files, freed the ambitious architecture from common fabrication constraints and allowed it to be built on a very tight schedule.

The largest timber vault spans 110m across and the tallest is 40m high. Each roof vault comprises 13-19 arch trusses with glulam chords and a Vierendeel-inspired web of steel frames. Each arch truss comprises two bottom chords and one top chord with truss depths of 1.3m to 3m. The general arch geometry tapers from deep sections near the base to shallow section depths at the apex. The diagonal webbing consists of a light “pyramid” of plate members, allowing very slender web elements that minimize the visual connection between truss chords.

Purlins sit on top of the truss bottom chords and support translucent but very colourful pretensioned ETFE membranes. The double Larch top chord sits outside the ETFE cladding and exposed to the weather, creating the need for a carefully developed flashing system.

The architectural ambition to create smoothly curved enclosures combined with sloped ridge lines added a unique size and twist to each arch truss. Consequently, one bottom chord is always slightly lower than its neighbour within the same truss. This design decision affected the whole fabrication process by making every arch, web, and therefore truss connection unique. Parametric optimization, modelling, drawing, and fabrication were therefore paramount to the success of this project.

By parametrically generating all aspects of the geometry, StructureCraft enabled an end-to-end workflow that could cope with thousands of unique pieces and connections. The project was driven from Grasshopper scripts using custom C# object model and classes to define all structural members in 3D space including steel fabrication details and notches/holes into the timber. Meta data using key-value pairs were automatically assigned to each piece, containing BIM data such as fabrication, shipping, and construction information. This information in conjunction with the 3D geometry was used to generate automated fabrication, shipping, assembly, and erection drawings.

Furthermore, the Grasshopper script drove custom C# scripts for CNC data generation. After a coordination phase to confirm available CNC tooling and ensure output quality, the data was directly used by three different European Glulam mills to machine the truss chords. Not only was the fabrication process substantially shortened by the integrated workflow, but fabrication precision and error rates were also improved.

The initial architectural concept from Cui Kai used planar “trusses” with 2 chords and only vertical webs connecting them — no diagonals — signalling the architectural desire to create a minimalist truss that highlighted the timber chords. It was clear that simply triangulating this truss structure not only visually distracted from the curved glulam elements, but also created challenges for assembly of truss segments in the air.

StructureCraft discussed the idea of using a true Vierendeel truss scheme to connect the chords, but the complicated and expensive moment-fixed web connections would not be practical. Therefore, a unique Vierendeel-inspired concept of two leaning triangles connecting the glulam chords was devised. The shear induced in the system by global moments is translated into a triangular push-pull, which is structurally more efficient than a bending-active Vierendeel web.

Shipping and Pre-assembly: Due to the necessity of shipping the glulam pieces from Europe to China by rail, single members were constrained by container sizes, so the parametric project tools were used to optimize container packing and shipping sequence. Once the material arrived on site, temporary fabrication facilities took over to assemble the so-called sub-assemblies. These approximately 11.5m long assemblies consisted of un-spliced glulam chords and associated steel webbing. Two to four sub-assemblies were connected near the final arch location and formed up to 35m/25t lift-assemblies. One arch consists of up to five lift-assemblies.

Erection Methodology: The construction of the superstructures began after all internal steel buildings were finished, so shoring towers had to be supported by the steel structures below in several locations. In addition to providing temporary support, the shoring towers were critical during the construction process by controlling the arch geometry.

Each arch erection started with the base lift-assemblies, supported by a shoring tower at the tip. After the lift assembly was landed and surveyed, the permanent base connections were field welded. Then infill assemblies were installed, and finally a keystone section closed each arch. After a sequence of arches got erected and were tied together by purlins, the shoring towers could be lowered and reused for the next arches. Finally, the LED screen cables were installed and pre-tensioned in carefully planned order and load steps. The construction process was overseen by StructureCraft’s partners in China, and the structural observation was managed remotely from Canada using frequent video calls and photo updates/daily reports from the site team. This working relationship has been established over the course of designing and building several previous engineered-timber marvels in China, and so the travel restrictions caused by the Covid-19 pandemic did not delay completion of the project.

Tianfu Agricultural Expo’s strictly parametric design approach has enabled architectural creativity to be freed from traditional fabrication constraints, enabling a true batch-size-one approach to manufacture and construction — most of the 60,000 Glulam and steel pieces were unique.

The delivery of this structure in less than 1.5 years was only made possible by combining a unique vertically integrated team of structural engineers, manufacturers, and builders united with a singular purpose of creating this highly complex project, alongside an architect who drove the ambitious vision. All structural details were designed with fabrication and construction techniques in mind, embedding buildability into the heart of the structural design.

The result is a unique series of long-span timber structures, created through cooperation of team members on three different continents, delivering indeed the owner’s desire for a world-class attraction. The Tianfu Agricultural Expo will showcase not only the economic power of the Chengdu agrarian region, but also the stunning structures that can be constructed through innovative timber engineering and integrated design and construction.